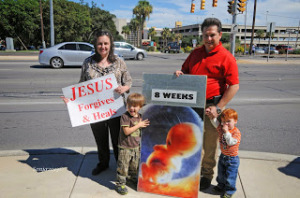 The most tragic words I have ever heard a pastor speak on the subject of abortion are , “I don’t want to get involved because it is a political issue.” This statement reflects that the individual has bought into a false premise, is ignoring the example of the prophets who condemned many social ills including child sacrifice by the leaders of Israel and has not seriously considered how the gospel applies to the issue of abortion.

The pastor has a responsibility to preach the gospel. The Apostle Paul writes to Timothy in 1 Timothy 4:

I charge you in the presence of God and of Christ Jesus, who is to judge the living and the dead, and by his appearing and his kingdom: 2 preach the word; be ready in season and out of season; reprove, rebuke, and exhort, with complete patience and teaching. 3 For the time is coming when people will not endure sound[a] teaching, but having itching ears they will accumulate for themselves teachers to suit their own passions, 4 and will turn away from listening to the truth and wander off into myths. 5 As for you, always be sober-minded, endure suffering, do the work of an evangelist, fulfill your ministry.

This responsibility entails preaching the whole counsel of God’s word. This includes teaching on difficult and hard to hear passages and seriously addressing sin. For this reason Paul warns Timothy that people will not always want to hear the word preached and will prefer those who “tickle” their ears. Paul’s admonition is to fulfill his ministry anyway and to preach the word. The motivation is that Timothy will be held accountable by the one who will “judge the living in the dead.”

Like Timothy, all of us who preach will be judged. And like the prophets before us in Scripture, we are called upon to address the sins within our churches and the sins within our culture. This is our duty as shepherds and the fulfillment of Jesus’s command for us to be “salt and light” in the world. Silence on a subject such as abortion is not acceptable for it is a sin within our churches which needs to be addressed and the healing of the gospel applied. It is also a sin in our culture for which we must shine the light of word of God concerning human sanctity and as an affirmation of our gospel mission to seek and save that which is lost.

We know that abortion is a sin that takes place within our churches. The number of abortions and the statistics concerning the number of women who have had abortions bear this out. We also know that abortion leaves women physically, emotionally, and spiritually damaged. To not talk about the subject and share God’s message of forgiveness is to neglect the healing needed by women who are victims of abortion. Sin which is hidden is sin whose shame is never removed and sin which will continue to burden the soul. It is unloving of us as pastors not to preach the gospel to women to extend to them God’s grace.

Abortion, isn’t only a woman’s sin. Obviously a woman did not get pregnant on her own. Where there is a baby, there is a man who played a part. Abortion is often seen as the solution to hide sexual sins such as fornication and adultery. Pastors neglect their responsibility if they do not teach and preach such that their congregations have a biblical worldview on human sexuality. Abortion is the result of an absence of such a worldview. A pastor’s silence on this point, not only in the area of teaching, but also may be prohibitive to a couple feeling they can come to the pastor to seek guidance when in the situation where there sin may be found out.

Abortion isn’t someone else’s sin. Pastor, it is the sin of your church members. You have men and women in your congregation which have participated and contributed to abortion. You have a responsibility to minister the gospel to your congregation; to preach it in your pulpit and in the marketplace. To provide the message of healing and grace for those who have sinned and those who need the strength to choose life over death.

Planned Parenthood has a message for your members and the world as well. Their message is death and their solution is the death of a baby. to this end they are building a regional Planned Parenthood clinic which will be able to abort 20-40 babies a day. They are not shy about their agenda and they will not halt proclaiming their message of death.

Jesus’s death provides the better solution. In the gospel the truth is that Jesus died for our sexual sin such that the unborn baby need not be killed. In the gospel is the establishment of community that celebrates life and embraces those who need assistance to bring a child into the world. We need to proclaim these truths and apply gospel to abortion.

Pastor, your leadership is needed. Shepherd the flock. Join hands with those of us who are fighting to stop the slaughter of the unborn. Working together we can proclaim the gospel and its healing for human sexuality. We can aid our congregations to grow in character such that they live out Christian charity to those in less than ideal situations and to the unborn. Paul commands us to preach the word. Pastor preach the word of life in a culture of death because its right and because you will be held accountable.